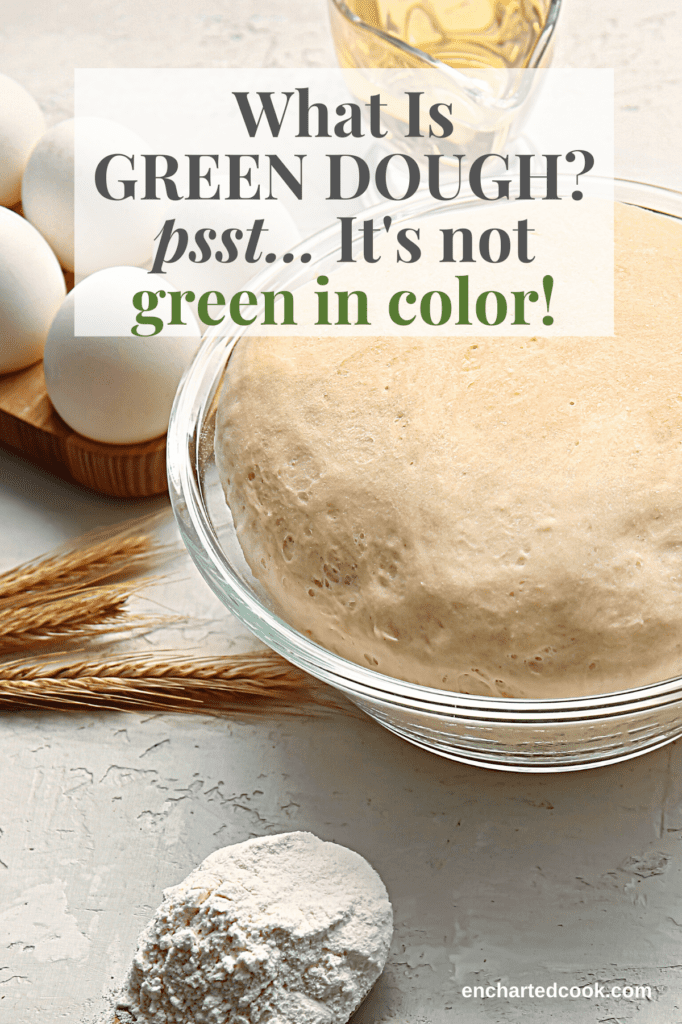 Green Dough? Who knew such a colorful term was about leavening! Do you have questions about why bakers choose baking powder instead of baking soda? It’s always baking season, so let’s talk about the right method and agent for perfecting your bake!

But first, let me tell you how I learned about green dough. Did you know that it doesn't mean that the dough is the color green?

What is Green Dough?

Green dough is a term for under-fermented bread.

Years ago, I worked for a wholesale food distributor that was also a flour mill. As part of their quality control, they had an employee that made bread at least once a week from the flour that was milled and stored on-premise. One day I was in the breakroom when a new loaf had just been pulled from the oven. As I was getting my cup of coffee, my co-worker said, “I bet you’ve never had real bread before”.

I remember being a little annoyed. Not only was I from San Francisco, home of exceptional sourdough bread, but I was a fairly competent home cook and I chirped, “Actually, I make bread at home”. He quickly retorted, “Well, all you make is a green dough.”

Now, I was offended. I didn’t know exactly what the term meant, but I knew it wasn’t a compliment.

Those were the days I kept a starter in the refrigerator and often made bread and rolls with no less than 3 raisings before shaping and performing the final rise. It was the early 80’s and “Fred” and “Herman” starters were very popular.

I said I didn’t know what “green dough” was and he said, home cooks only let their dough rise once. So, my dough was “green”.

Now, I was really confused and my look of confusion prompted him to ask me how I made bread. After I told him about the starter and the multiple punch-downs, raisings, and the resting of the dough before shaping, he apologized.

What can I say? I was young and he was much older and assumptions were flying!

This was when I learned that “green dough” was a proper baker’s term for under-fermented bread.

That one conversation, years ago, sparked my curiosity and I started thinking about leavening. I knew that yeast was one of the ways to leaven baked goods, but being a simple home cook with only one semester of Home Ec cooking, I always followed recipes explicitly without knowing the "whys" and "hows".

It was years later of cookbook collecting and PBS cooking shows that I really began to understand leavening.

Simply put, leavening is the creation of air to lighten a batter, dough, or mixture. Leavening always works to add air to baked goods.

Basically, there are 3 methods to leaven baked goods: Mechanical, Fermentation, and Chemical.

The first two agents, air and egg white, are mechanical methods to leaven. So, let’s talk about each of these first.

When you use The Creaming Method to make a batter you are beating the butter so that air is incorporated into the mixture. This is what causes the color of the batter to lighten. You continue to beat after adding the sugar and then the eggs. This causes more air to move into the creamed mixture, which will result in a less dense crumb.

Beating egg yolks until they thicken slightly and lighten in color is another example of adding air to lighten a batter. This technique is generally stated in directions for sponge-type cakes.

I’ve listed egg white next because it too requires vigorous beating to be a benefit in lifting a batter. Egg whites are capable of holding a great deal of air, and if beaten separately from the yolks, can easily support a mixture with no other leavening added. Angel Food Cake is the classic example of beaten egg whites creating a very light cake. Sponge cakes and soufflés are, also, prime examples of egg white doing its magic.

For every one cup of flour, you will need a minimum of ¾ of a cup of egg whites.

What would we do without our little friend, yeast? There is nothing quite like the flavor and texture of yeast-raised doughs and batters. As yeast multiplies and grows, it consumes sugar and releases carbon dioxide and the carbon dioxide is what makes dough light and airy. Be aware that too much of a good thing will turn bad. Too much yeast, by using too much to start, or too many raisings will cause over-fermentation of your mixture which will then have a telltale alcohol smell and taste.

Overall you will need 1 ¼ teaspoons of yeast per cup of flour in your recipe or 1 tablespoon per 4 cups of flour.

Although incredibly delicious, yeast doughs and batters take time for the fermentation to occur. Some recipes use a speed rise method, where you triple the yeast and only do one full rise before shaping and raising the final time. This is a faster method and with only one full rise you avoid over-fermentation.

The next 3 leavening agents are classified under the Chemical Method and are considered quick rises, compared to yeast. These agents all have a short raising or no raising before baking.

It doesn’t sound very romantic or “green” to say we use chemicals to leaven. But, we would not have many of our favorite quick-rising baked goods without baking soda, baking powder, or cream of tartar. Let’s briefly talk about these:

Baking Soda contains sodium bicarbonate and is the one leavening agent that needs a companion ingredient, acid, to do its magic. Any leavened recipe that calls for buttermilk, vinegar, or citrus juice will always include baking soda. Otherwise, why not just use baking powder?

For every one cup of flour, you will need 1 teaspoon of baking soda plus your liquid ingredients should include acidity.

Hello, my good friend baking powder! The only thing baking powder needs to start making bubbles of gas to raise your batter is moisture and heat. But, wait! There are two types of baking powder, single acting and double acting.

The key thing to know here is that double-acting baking powder contains baking soda. So, if you have a recipe that calls for baking powder and baking soda, it’s a pretty good bet the recipe creator was thinking single-action baking powder. Otherwise, you would be doubling up on the baking soda and get a very large hump on your baked loaf.

Additionally, It is also important to use a baking powder that does not contain aluminum. Aluminum gives a strong and bitter metallic flavor to baked goods.

For every one cup of flour, you will need 1 teaspoon of baking powder.

Last, but not least is cream of tartar, also known as potassium bitartrate. What is amazing about this leavening agent is it brings its own acid within itself. Taste it. On the tongue, it is immediately acidic and salty. The acid is why it aids in making egg whites quickly increase in volume and the salt is helps in stabilizing whipped cream to stay firm at room temperature.

As a leavening agent, it works beautifully, especially if there is lots of sugar. Just think about classic Snickerdoodles. The original recipe is leavened and flavored only with cream of tartar.

For every one cup of flour, you will need ½ teaspoon of cream of tartar.

One cool, smarty pants note about cream of tartar is that when grape juice is being fermented to make wine, crystals of cream of tartar can form in the barrels. These crystals can also be found as sediment in bottled wine. Anything from wine has to be good! Right?

This recipe directs you to beat the eggs until they are light and have incorporated air (Mechanical – Air Leavening). It then adds baking powder (Chemical – Heat). The next instruction is to add scalded milk containing butter that melts during the scalding. What???

This is pure genius. The scalded milk immediately applies heat to the batter and the batter is primed to rise! Not to mention the acidity of the milk, if you are using double-acting baking powder, which will give extra insurance of an excellent rise.

To learn even more about leavening methods and agents, be sure to check out my exclusive chart for Leavening Methods and Agents.

Hello and Welcome to Encharted Cook!

I'm Jan and I love to cook for friends and family. Over the years I have learned that many recipes are related and if you learn to make one delicious dish and you can make many more. So come join me as I chart recipes and ingredients and share my favorite dishes.