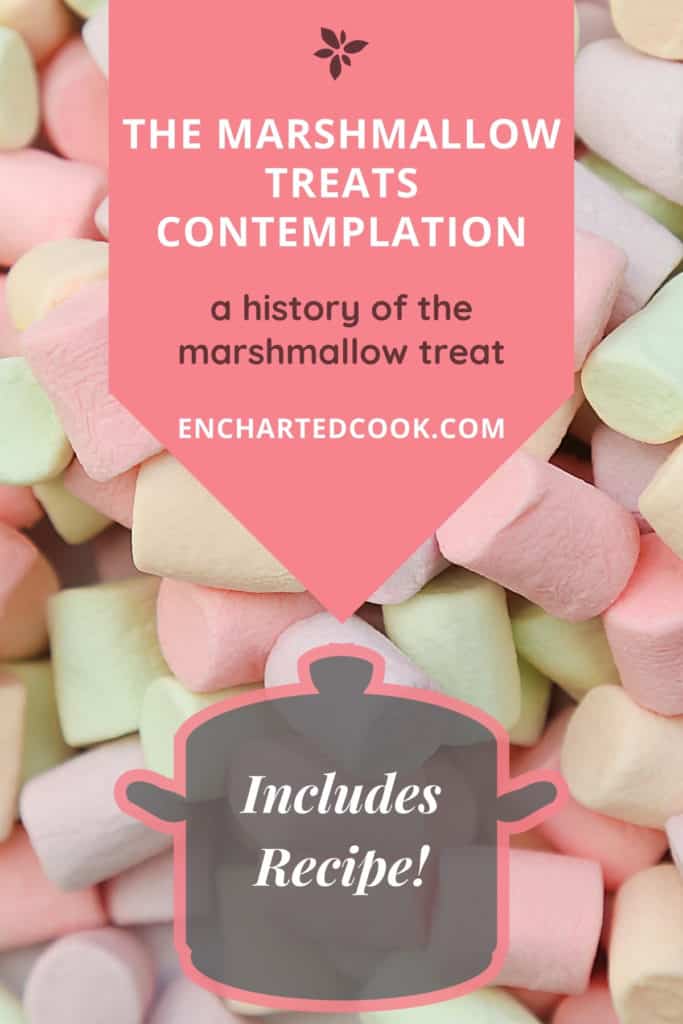 1939? Oh wow... I hate to go off subject here, but in many ways 1939 is arguably the very best year for movie making in Hollywood. Some of the greatest movies ever made were released in 1939 and nominated for Best Picture for that year:  Gone with the Wind, The Wizard of Oz, Goodbye Mr. Chips, Mr. Smith Goes to Washington, Stagecoach, Dark Victory, Ninotchka, Of Mice and Men, Love Affair, and Wuthering Heights. Wow! Sorry... there went that squirrel again! Time to get back on topic!

A History of the Marshmallow Treat

In this print ad, which I believe is from 1939, the original ingredients listed are butter, marshmallows, vanilla extract, and Kellogg's Rice Krispies. The name of this new sensation is "Crispy Candy - Rice Krispies Marshmallow Squares".

I'm not sure what year this next particular print appeared, but I'm guessing it is from the late 1940's since the box lettering is now black and Snap, Crackle, and Pop are in color and have the rounded ears. Here you can see that butter and margarine are listed as interchangeable in the recipe.

Making Treats in College in the 1970's

The very first time I made Rice Krispies Treats was about 40 years ago and I still remember the original recipe shown to me by a college friend. I remember it because it only used a half a stick of Parkay margarine and you had to count (yes!... count!!) the number of marshmallows for the right proportions of buttery marshmallow goo to Rice Krispies Cereal. Even though I grew up in a frugal household, my parents never bought margarine. They only bought butter. So, for me, it was a terrible wasteful idea of buying a whole pound of margarine for a recipe that only used about ⅛th of the package. But, my friend was very insistent that I not substitute butter for the Parkay. As it turns out margarine and butter are interchangeable for this particular recipe, since butter was the original ingredient.

In case you are wondering… here are the ingredients my college friend gave me:

...and here is that particular recipe, which appeared in a print ad:

There is no vanilla in this particular version and PARKAY margarine is prominently mentioned. Also, the name is now "Marshmallow Treats" and the name is tradmarked!

Today, there are a lot of recipes, names, and versions for "Cereal Marshmallow Treats". Compared to the original recipe, some have more butter, some have less. Some versions have the original vanilla extract... and still others add coloring, candies, nuts, coconut, chocolate, and/or other cereals like Cocoa Krispies or Fruit Loops. Needless to say, they are all simple to make and absolutely yummy!

As for the recipe currently on the back of  the box of Kellogg's Rice Krispies, it contains one tablespoon less of butter/margarine and has no vanilla. Hmmmmm.... and then there is this:

You might be wondering where I'm going with this long contemplation of the Marshmallow Treat and it is this:

My college friend just had to have Parkay in her treats and some people swear the vanilla extract is essential. My thoughts are... if you like a recipe on the back of a package, take a photo of it, cut it out, or write it down. Because nothing stays the same forever. Tastes and economies will change over time and manufacturers will change branding, recipes, and recipe names.

Overall Marshmallow Treats  have had these changes: the vanilla extract has been removed completely from the original recipe and the butter/margarine has been reduced to a mere 3 tablespoons from the original 4... and I ask why? I would assume the vanilla extract was omitted due to cost. When marshmallows are already vanilla flavored and budgets are tight, I can see this change would make sense. As for the reduction of butter/margarine, I can only guess it is also for ecomony.

But, this reduction also makes a treat that not as soft and can have a sturdy and sometimes hard texture. That harder texture is not necessarily a bad thing. It is great for holding it's shape. Freshly cut squares of treats made with less butter stack beautifully... and you probably have seen it used on cooking shows for edible sculptures.

Well... I think this contemplation has gone on long enough and it's time to get cooking!

Hi There! I'm Jan...... and I Love to Cook! For years I have been comparing recipes, creating new ones, and cooking up a storm. Do you like to cook, bake, look at food, and talk about it? Great! You are in the right place. So…Let's Cook!

Love lists? Me too! Get all 6 of my favorite printable lists and planning sheets when you subscribe.